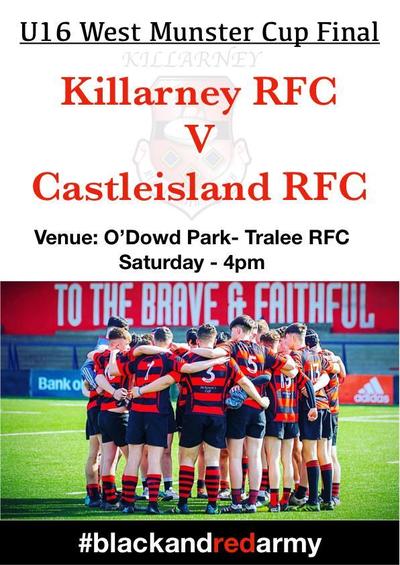 Killarney’s lack of panel depth finally caught up with them on Saturday 13th in this final played in Tralee against local rivals Castleisland.  Down 7 regular players for various reasons they started this final on a 13 v 13 basis knowing that any further injuries would result in a concession. The return of winter on the day with a storm force wind, driving rain and biting cold made conditions almost impossible for both teams.

With so many positional changes Killarney started hesitantly and with passes either hitting the deck or blowing forward they gave  the pumped up Island Boys a platform to attack. After several forward movements Jordan O Sullivan burrowed over to establish an early 5 point lead.

Gradually Killarney got forward momentum however the usual continuity and crispness was lacking. After a period of wind-assisted dominance  the ball was moved through the backline and ever sharp Tomas Clifford raced in on the left to score. Donnchadh Grealy nailed a difficult conversion to give Killarney the lead.

The half continued with Castleisland forward surges and long relieving Killarney kick clearances and decent chase follow ups. However the scoreboard remained untroubled.

Playing into the wind in the second half Killarney settled into a more controlled rhythm. In the adverse conditions the line out functioned remarkably  with Brendy O Donoghue finding John McCarthy continously. The back field trio of Tomas Clifford, Mikey Moriarty, and Jack Kenneally superbly ran back any kicked ball and threatened the defence on several occasions. Donnchadh Grealy, Padraig Talbot, and Ozdenis Koyun carried controlled ball away from the physical Island pack.

With 15 minutes remaining Castleisland got close, electing to go blindside from a 5 metre scrum hovever the defensive line held up.

With time ticking on it seemed like Killarney might hold on. Play was remaining between the 10 yard lines and Killarney were containing attacks and cooly controlling their own ball. Spirits were lifted further with one huge lineout drive from the combined Killarney forwards unit of Rob Nealon, Mike O Donoghue, Brendy O Donoghue, Shane McAllister, Darren Cronin, James Kenneally, and John McCarthy that surged upfield.

However, the game’s intensity began to take its toll. Castleisland introduced fresh legs and after one attacking phase of play three Killarney players needed attention. With 8 minutes remaining the Killarney coaching team decided to take off one of their players for precautionary reasons and even though ahead on the scoreboard the reduction to 12 meant the game was conceded. The lads were devastated and exhausted after their superb effort yet their camaraderie was evident in their post match unity. Congratulations to a hungry, committed Castleisland team who brought home the cup.

This game brought down the curtain on what has been a hugely successful, breakthrough year for the club. The statistics are impressive. 19 games played, 16 victories, 2 defeats, one concession. The team scored 375 points and conceded 115 in response. The team were South West Conference winners and for the first time Munster Development Cup winners. The journey was always exciting and compelling with victories against teams like Nenagh Ormond,  Cashel Kilfeacle, Clonmel, Carraig on Suir and Cork Con.

The coaching team of Seamus Grealy, John OConnell, Eoin Seery, Leo Randles, Bill Stack, Con Crowley and Fiona Reidy would like to congratulate the lads and thank them for their commitment and amazing performances. A word of appreciation as well for  our super parents, family members and fans whose huge support was a feature of the year.

A special word of thanks to our resident photographers Mary McCarthy and Ian Cronin whose work thankfully recorded all for posterity.

Ensure to tick off Sat May 11th in your calendar and attend the Club’s celebratory open family day when medals will be awarded and memories traded. 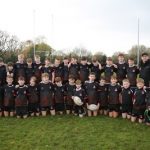 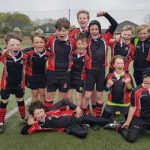