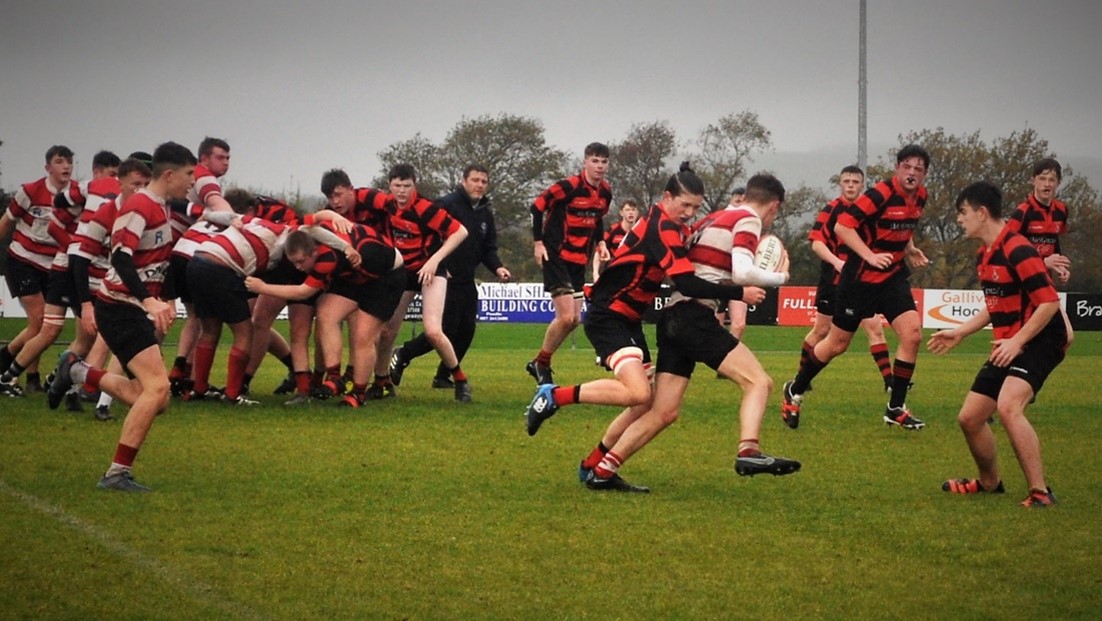 (Pic: Gearóid O’Connor makes his tackle as RCD attack from a scrum)

Bank of Ireland Munster U-16 League

November didn’t disappoint as seasonal wind and rain swept across Killarney RFC’s club grounds at Aghadoe to welcome the visitors from West Kerry, Rugbaí Chorca Dhuibhne for the clash with Killarney in their last home fixture in the first stage of the Bank of Ireland Munster U-16 League on Saturday the 6th of November. 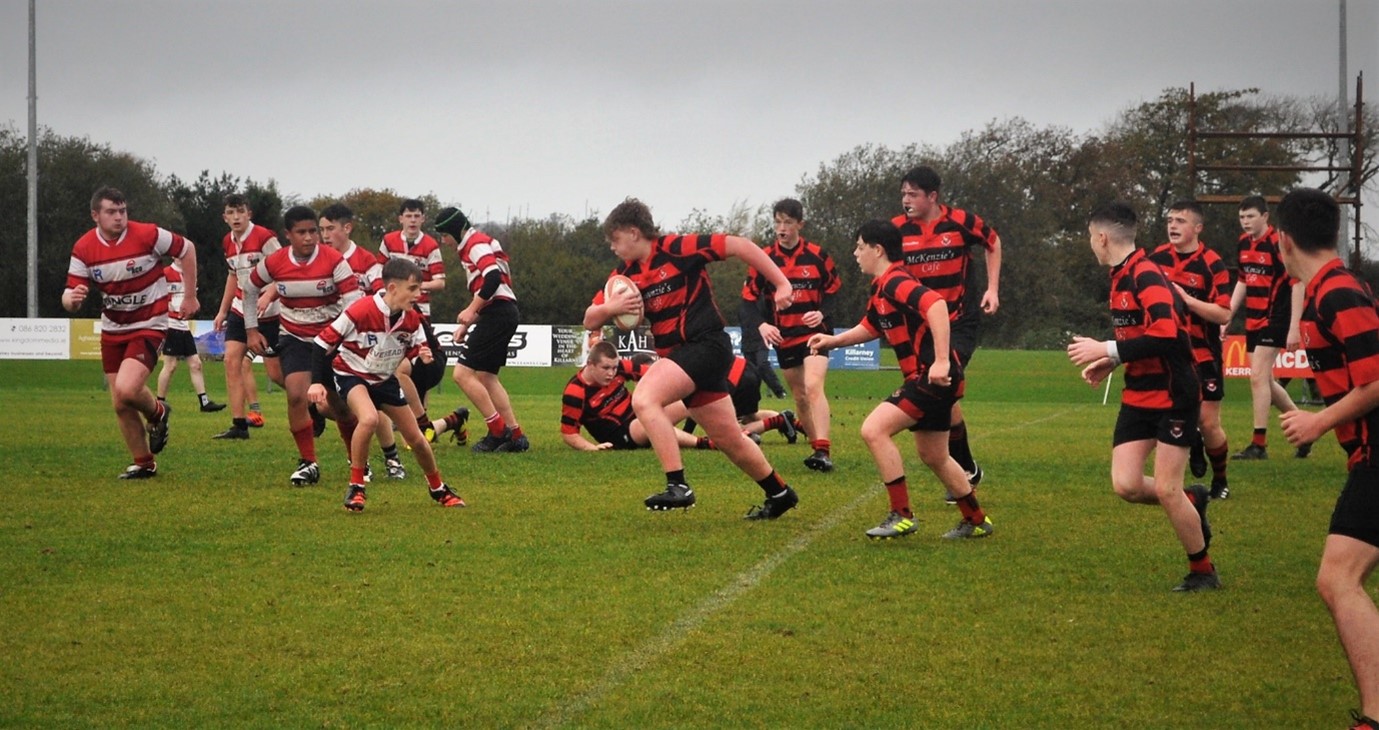 Both teams came into the game in a vein of good form each with 3 wins from 3 in the opening rounds of the competition and tied at the top of the table with Killorglin/Iveragh, making this game a clash to send a winner to the top of the group table on the first of 2 big weekends in a row for Killarney who are due to play Killorglin away next week. 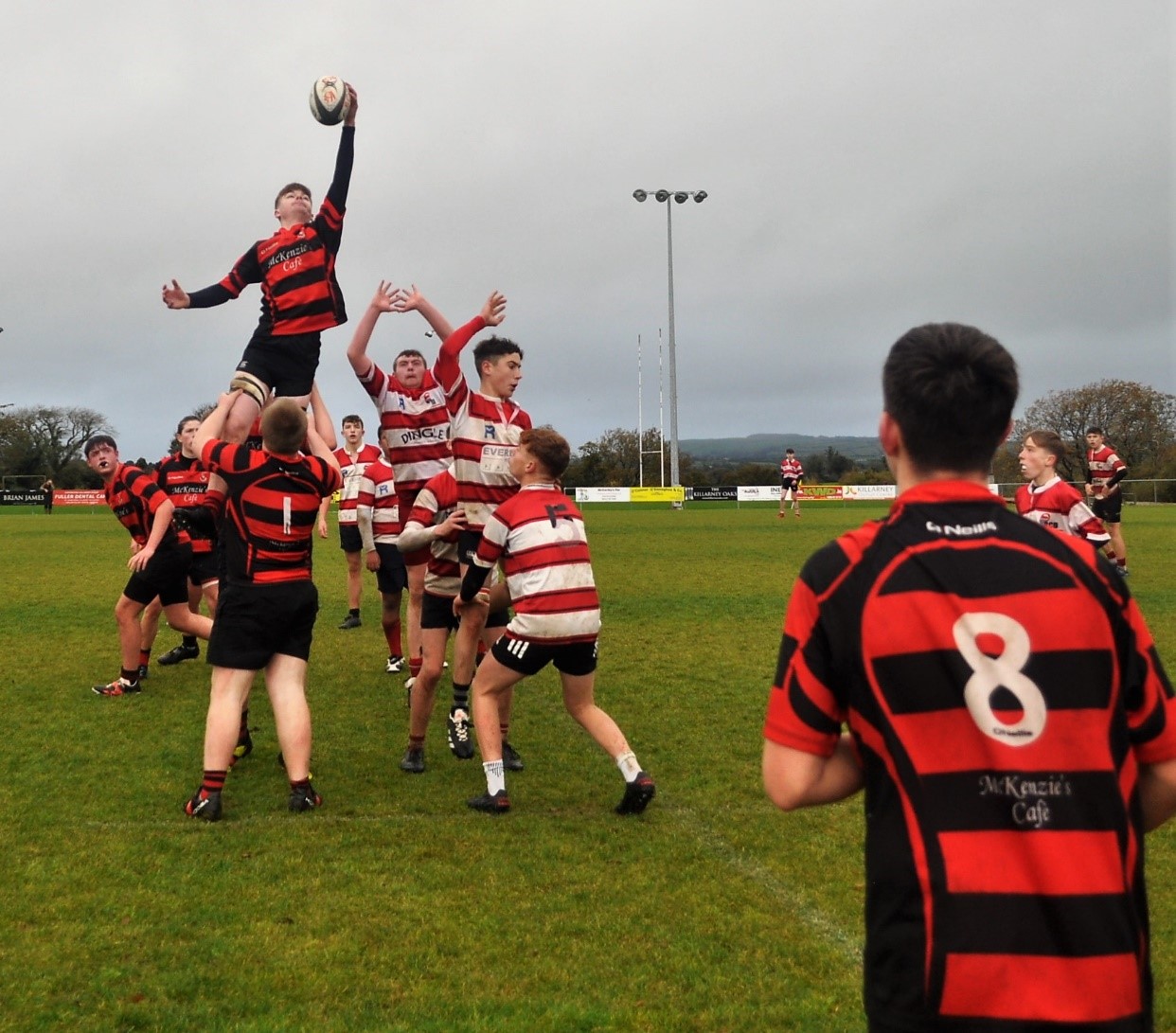 The home team were heading into this match having had a very solid season to date, going into the game with 5 wins from 5, overcoming Killorglin in the West Munster U16 Cup in their season opener in Ballymalis followed by encouraging wins over near neighbours Castleisland and Tralee before another win on the road against a tough Newcastlewest team in their 3 league clashes. A break for a fortnight was followed by a “bye” week in the league which was filled by the visit of the u-16’s from highly regarded Bruff RFC from Co. Limerick to Aghadoe for a friendly played in atrocious conditions a week earlier but the teams didn’t take much heed of that and served up some very entertaining rugby and a 17-5 win for the Kerrymen made it a clean sweep of wins before last Saturdays kick-off.

Tight early exchanges were a sign of things to come where scores proved very hard earned in this game. Killarney defensively started very well playing into strong wind and rain but were unlucky early to lose captain Scott Carlton to injury after just 6 minutes and a reshuffle in the centre was needed. The hosts battled hard under sustained pressure from RCD but held their nerve to reach half time without conceding as a tense first half ended scoreless and Killarney having weathered a storm in more than one sense, relished the chance to attack with the wind at their back in the second half. 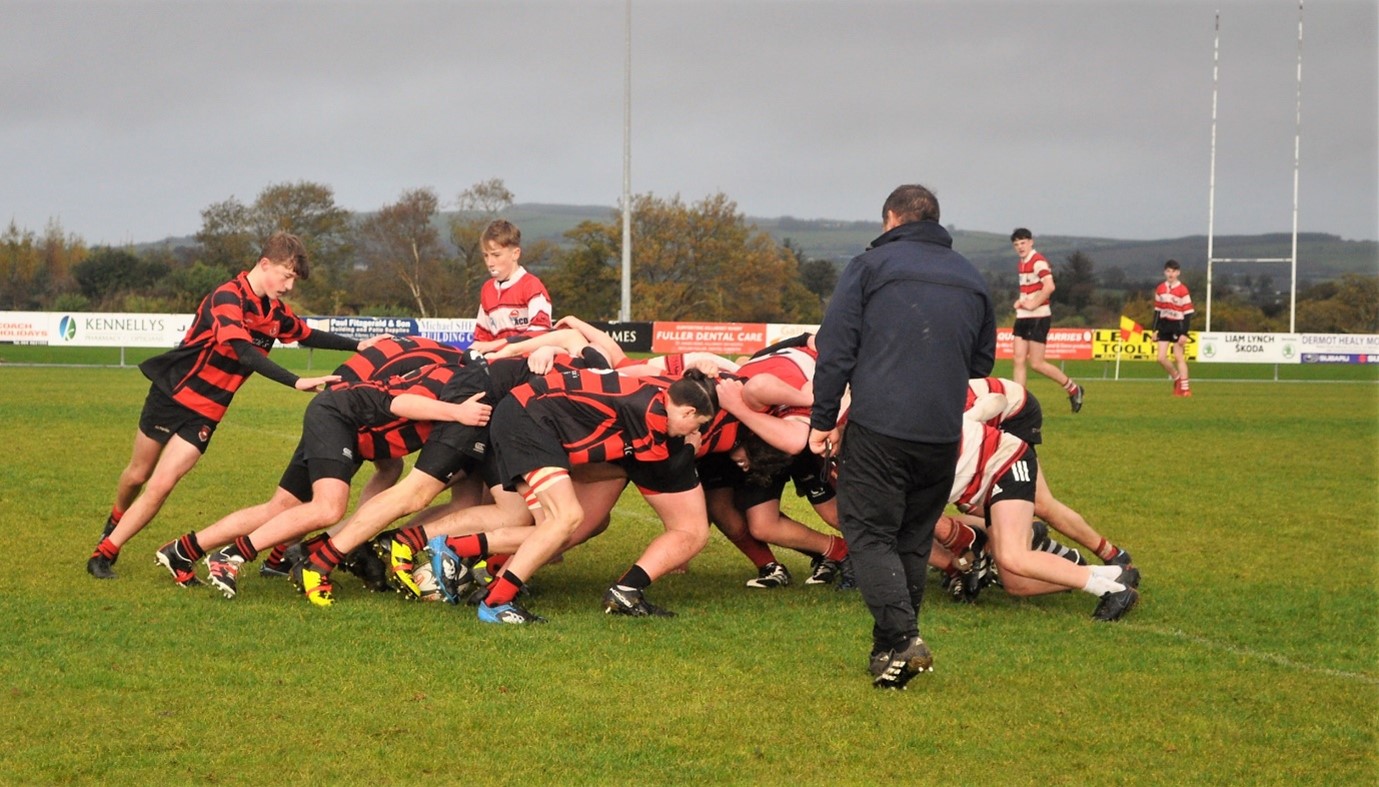 (Pic: Killarney prepare to attack from a solid scrum.)

The men from Dingle had other ideas though and put up a strong defence of their own making Killarney dig deep but the deadlock was finally broken as a Shane O’Sullivan penalty nudged Killarney 3-0 into the lead. Killarney began to feel they might just be getting the edge they created space to attack wide left of Dingle’s defence, but conditions and the intensity led to a knock-on & missed pass at the final hurdle that snuffed out the chances to put real daylight between the sides.

As the match reached the final minutes neither side had flinched in a hotly contested game & it was in the last 5 minutes the game was settled. Killarney in possession put pressure on & managed to get a foothold within the RCD ’22 to make what became the crucial assault on the Dingle line as the score so desperately sought all day arrived when Killarney found an overlap wide on the right and it was Dara Stack who finally breached the defence to touch down on the line sparking screams of delight from the home team and putting Killarney 8-0 up. The try wasn’t converted but Killarney now had a two score lead and had the heavy lifting done with the game in its dying minutes.

RCD weren’t lying down though and defiantly fought to the death & had the last say, battling all the way to the Killarney line and notching up a try of their own from short range in the last play of the match with the conversion unsuccessful to make a final score of Killarney 8, Rugbaí Chorca Dhuibhne 5 as Killarney’s u16’s extended their winning run to 6 from 6 in their toughest test to date but, its not over yet between these boys as both teams will have to do it all again as they meet in the West Munster Cup Semi Final due to be played in Ballydavid later in the season. 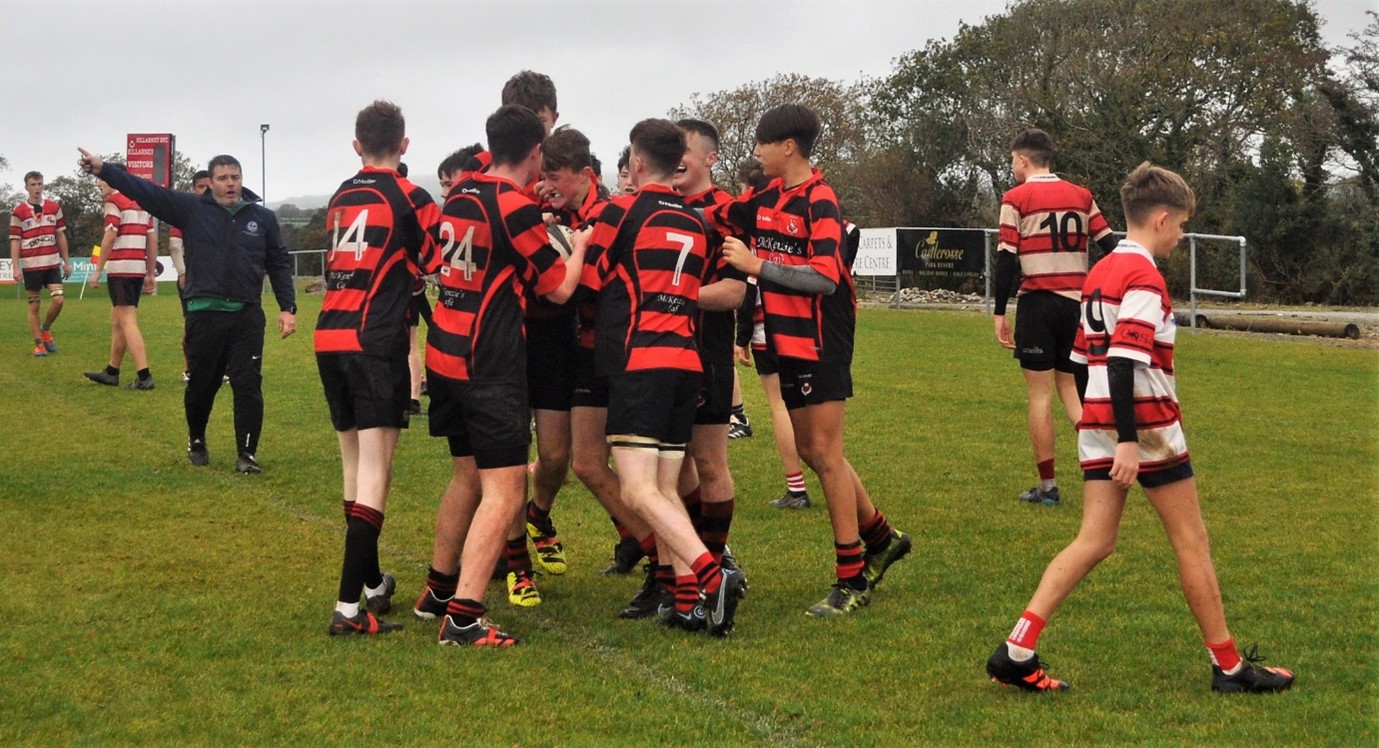 (Pic: Celebrations as Killarney get over the line for the crucial try that put Killarney 8-0 up in the dying minutes.)

Lining out for Killarney on the day were:

U14 girls in league win at Tralee:Congratulations to our Killarney U14 Girls team who put in a terrific performance beating a spirited Tralee RFC team on Sunday morning at O’Dowd Park. Despite missing a number of players the 13 Killarney girls won 35 – 25. Thanks to all at Tralee RFC for the match and hospitality following the match.Well done to all players, coaches and team management! #blackandredarmy#killarneyrfcgirlsrugby #killarneyrfc Scotts Hotel Killarney
… See MoreSee Less

Senior team announced for match away to Castleisland:Here’s the Senior team for today’s away Munster Junior League game over at The Crageens. Kick off it at 2:30pm and all support is very welcome! Good luck one and all!#blackandredarmy#killarneyrfcseniors #killarneyrfc Scotts Hotel KillarneyThe Killarney Avenue Hotel
… See MoreSee Less