Fantastic day in Killarney for a VIP visitor: 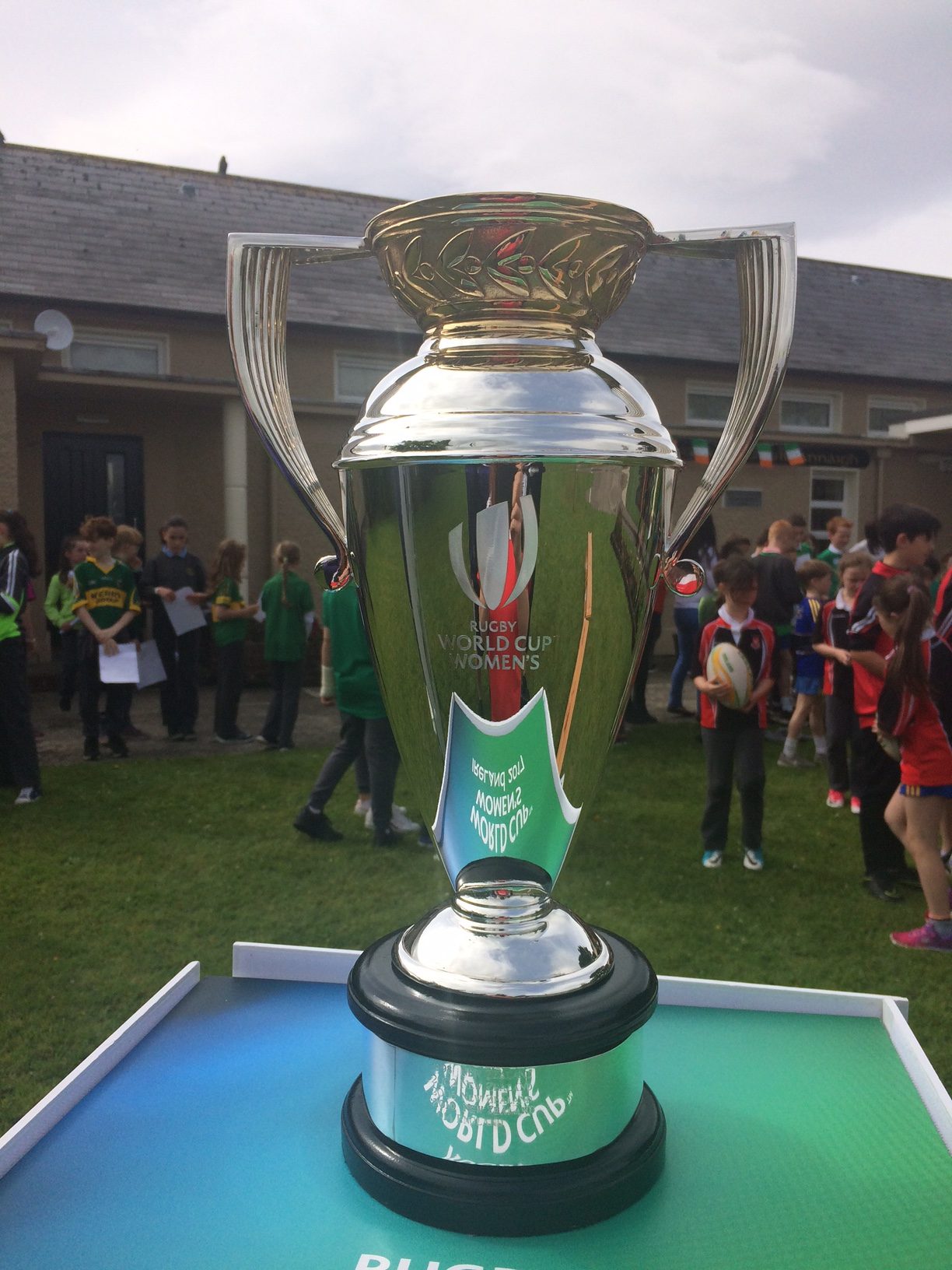 Last Monday was a hectic one for all involved in girls rugby in Killarney Rugby Club as we welcomed the Women’s Rugby World Cup Trophy to Killarney. We had the trophy for the full day and planned a busy day for the visit. All we were hoping for was that the weather would hold and we could bring the trophy outdoors and true enough the weather held up. 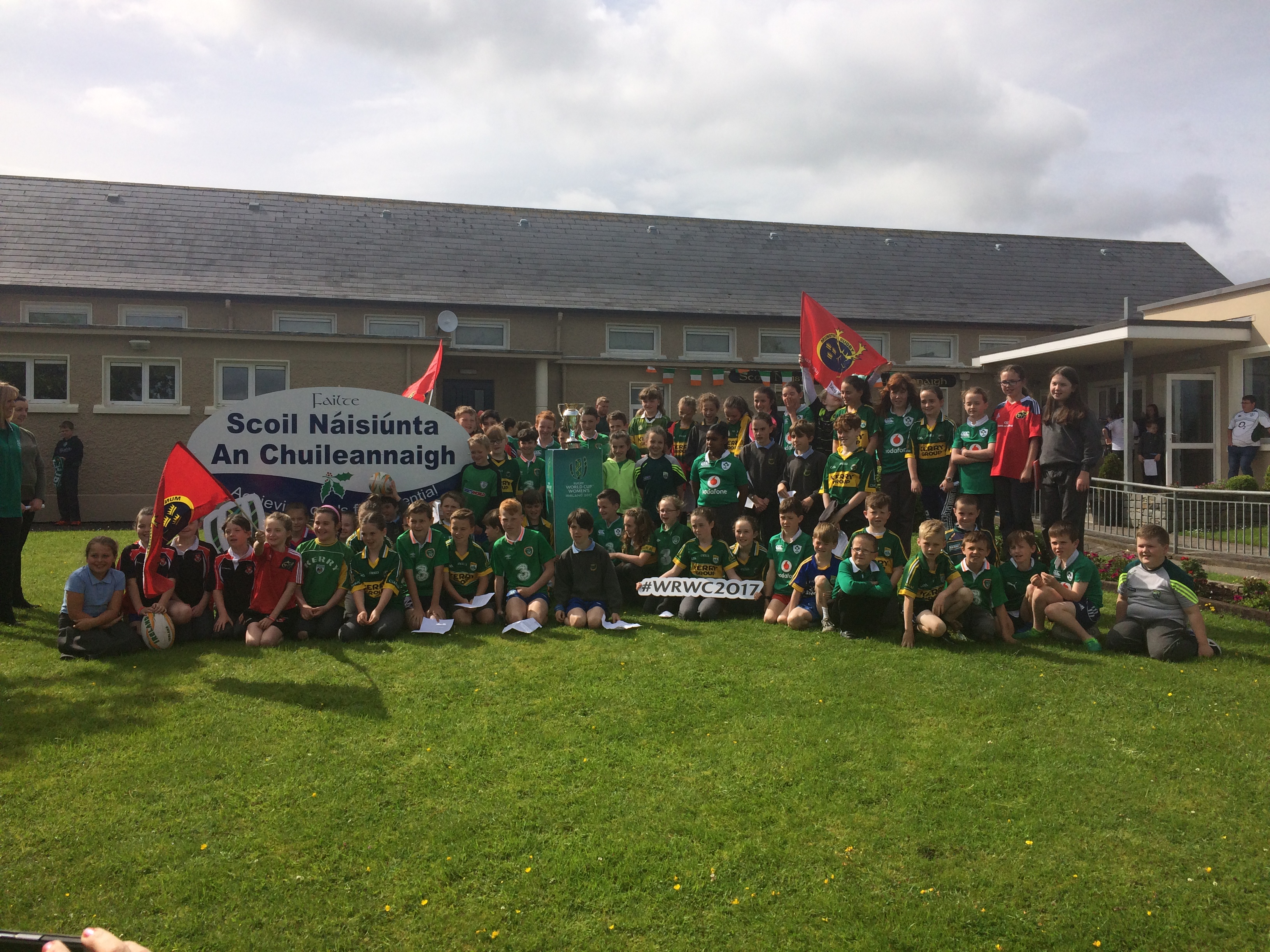 Cullina National School out in force to welcome the Trophy

First up we brought the trophy out to Beaufort where a fantastic welcome was given at Cullina National School. The kids who were kitted out in their jerseys gave a rousing version of Ireland’s Call, followed by an amazing Haka ‘As Geailge’ and got some great photos with the trophy. The sunshine really made the day memorable for all involved and it was fantastic to see so many kids in rugby jerseys and especially in Killarney Rugby jerseys! 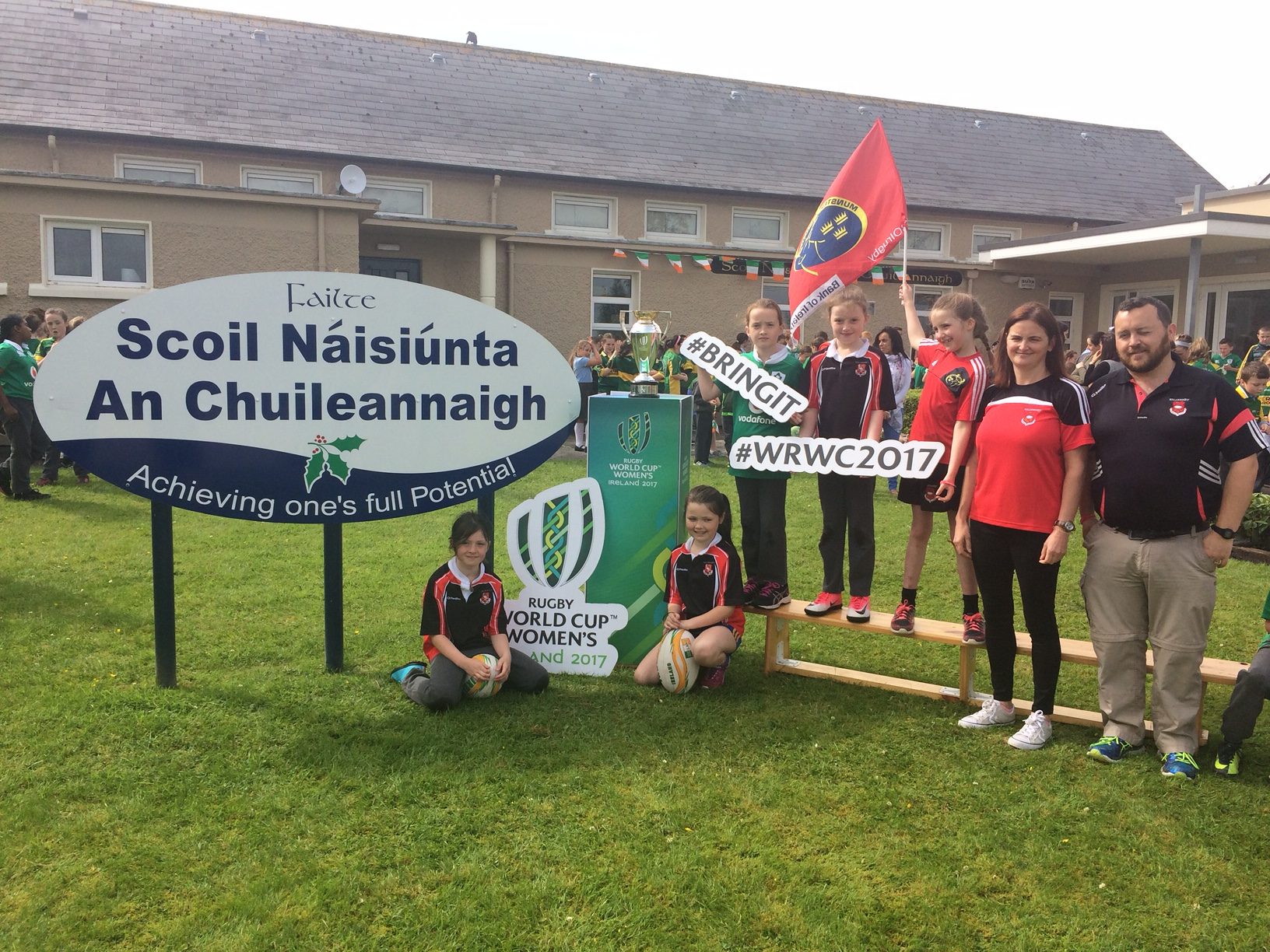 Killarney RFC Coaches with some of our players

Then it was onto Faha, where we received another fine welcome. All 189 kids got a class photo taken with the trophy and some excellent questions were asked about the history of the world cup and about rugby in general. 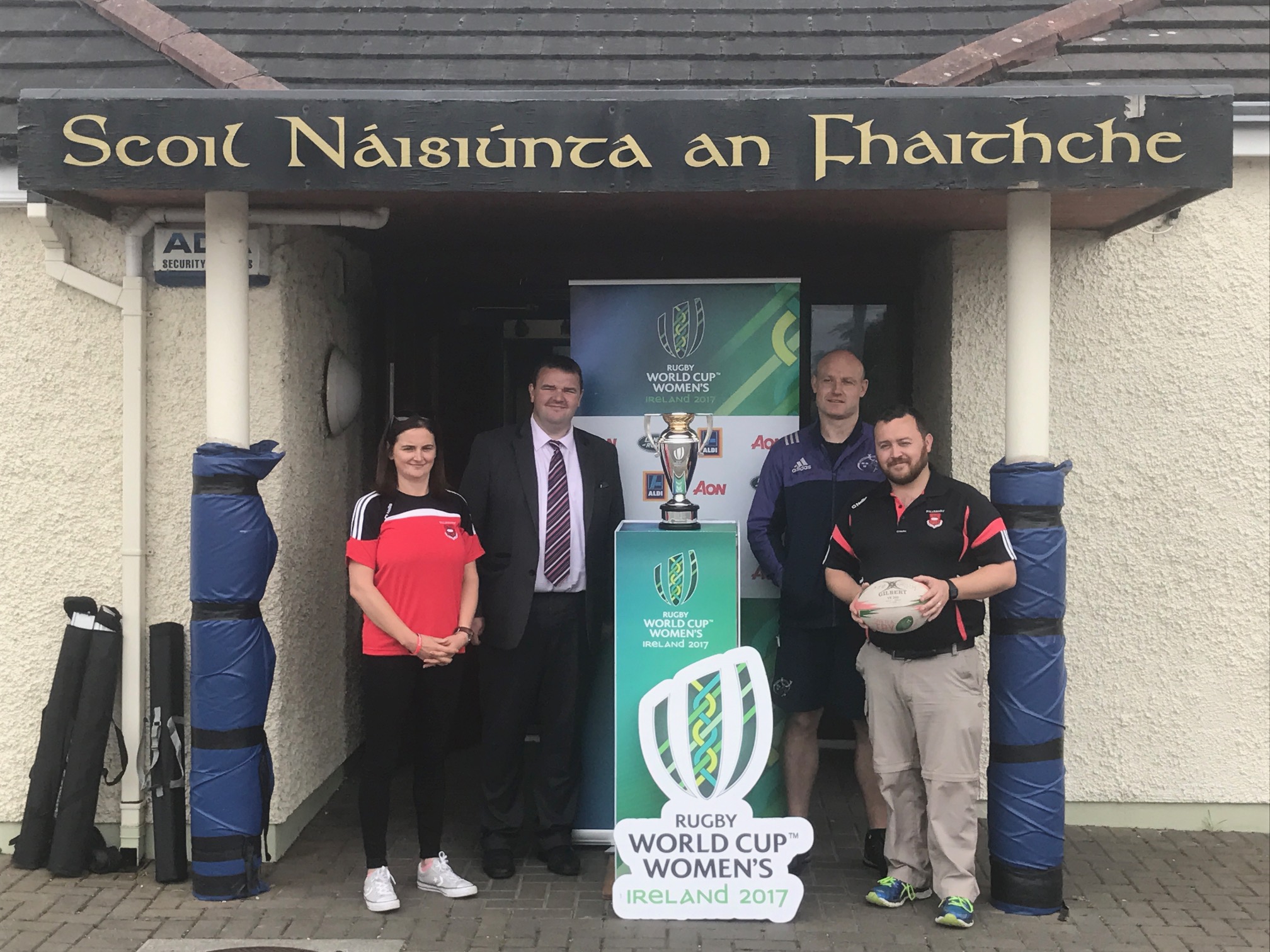 Then we moved tour third and final school – Fossa National School where all the kids got to see the trophy and more songs were sang in honour of the historic visit. Thankfully the weather held up and every class got to pose for a photo with the Trophy. 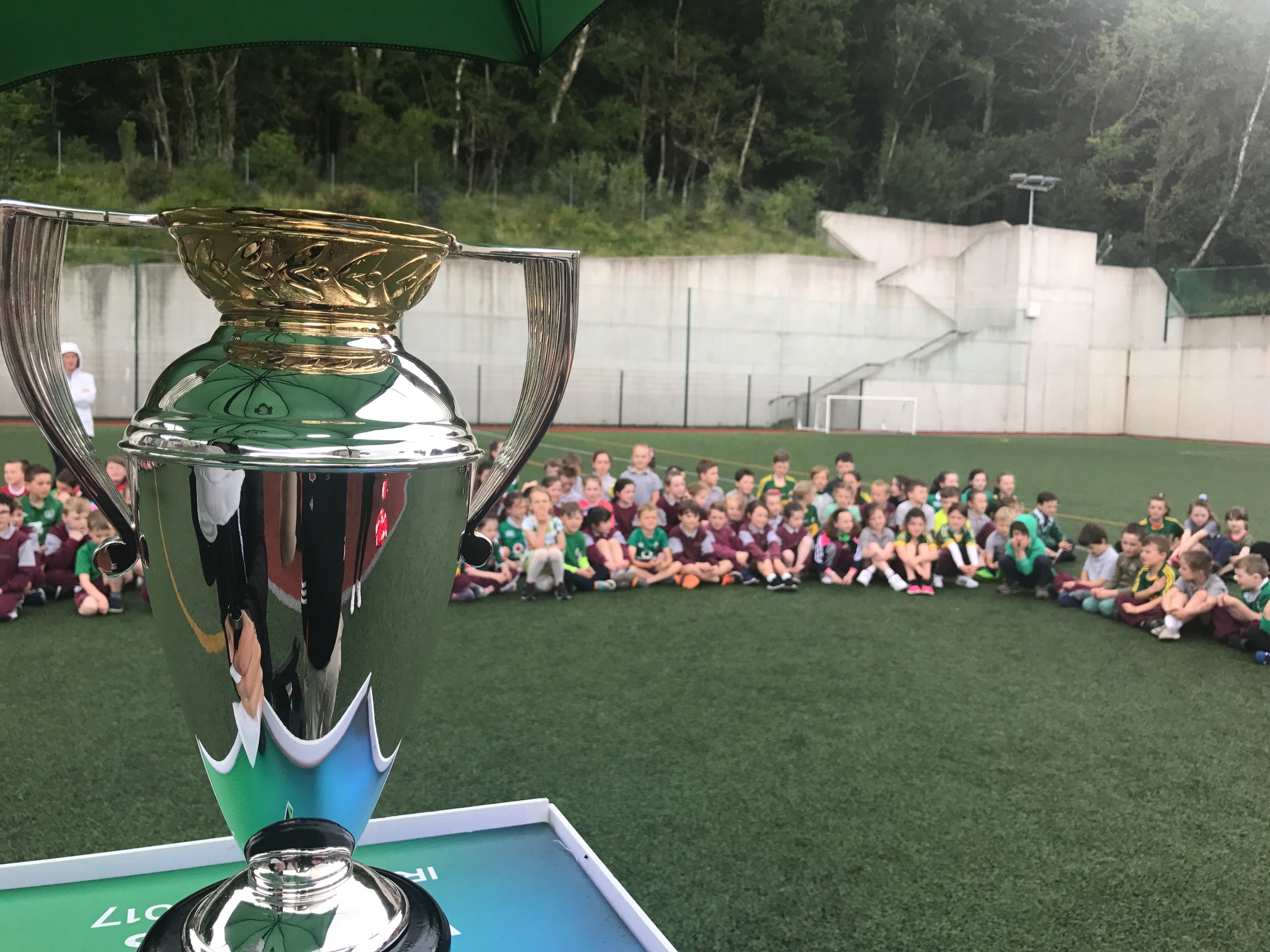 Children at Fossa National School welcome the trophy with a singsong

A huge thanks must go to the principals of the schools Maire Bn Ui Chroinin – Cullina, Jerry Fitzgerald – Faha and Pat Clifford – Fossa for the huge welcome on the day and to the children for the enthusiasm shown. The kids were delighted to see the trophy up close. 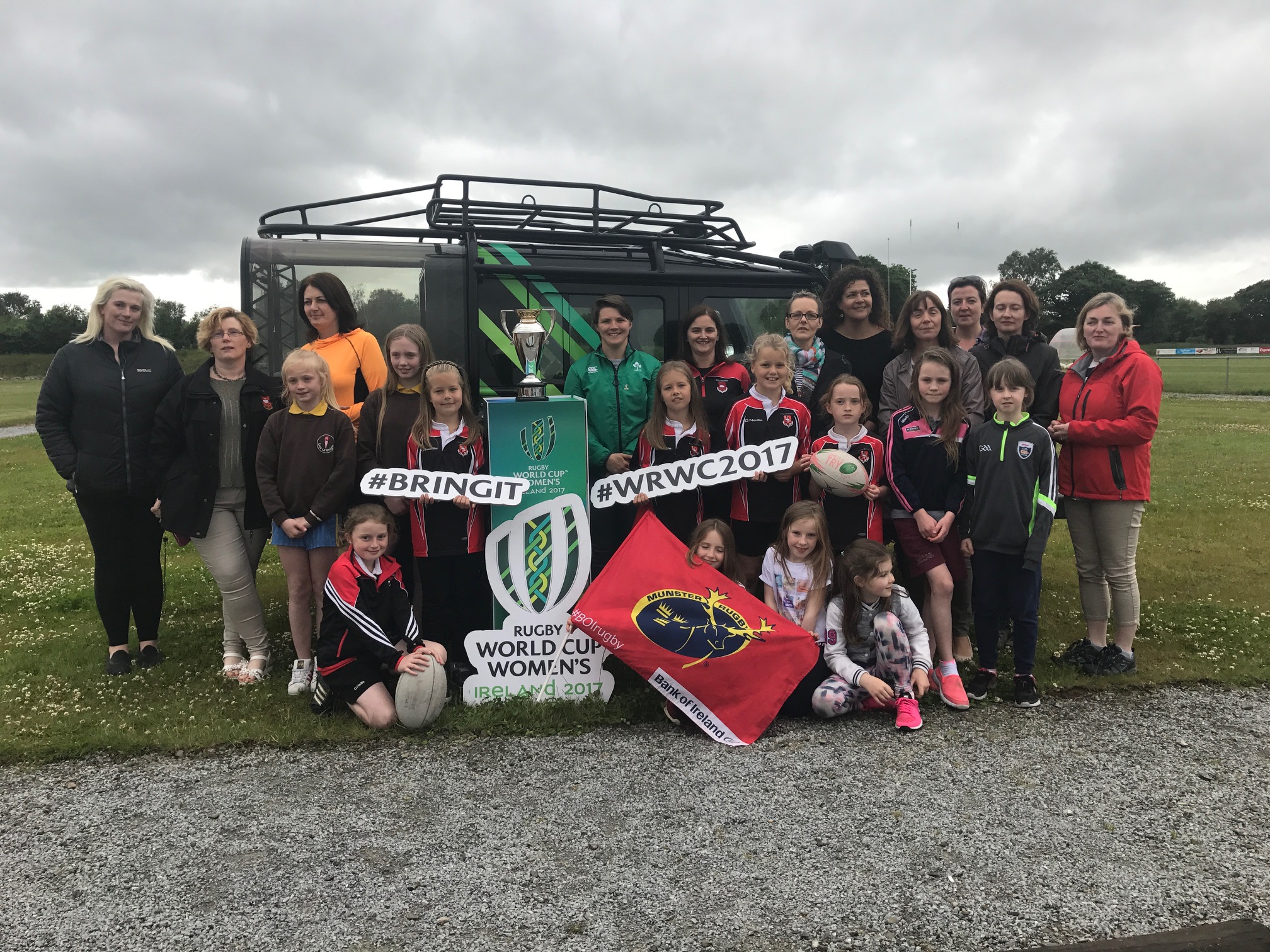 Then on Monday evening, we welcomed the trophy to our pitches at Aghadoe. Minis players, parents and coaches came along to get their phtoso taken with the trophy and Ireland Womens International Ciara Griffin was the guest of honour. 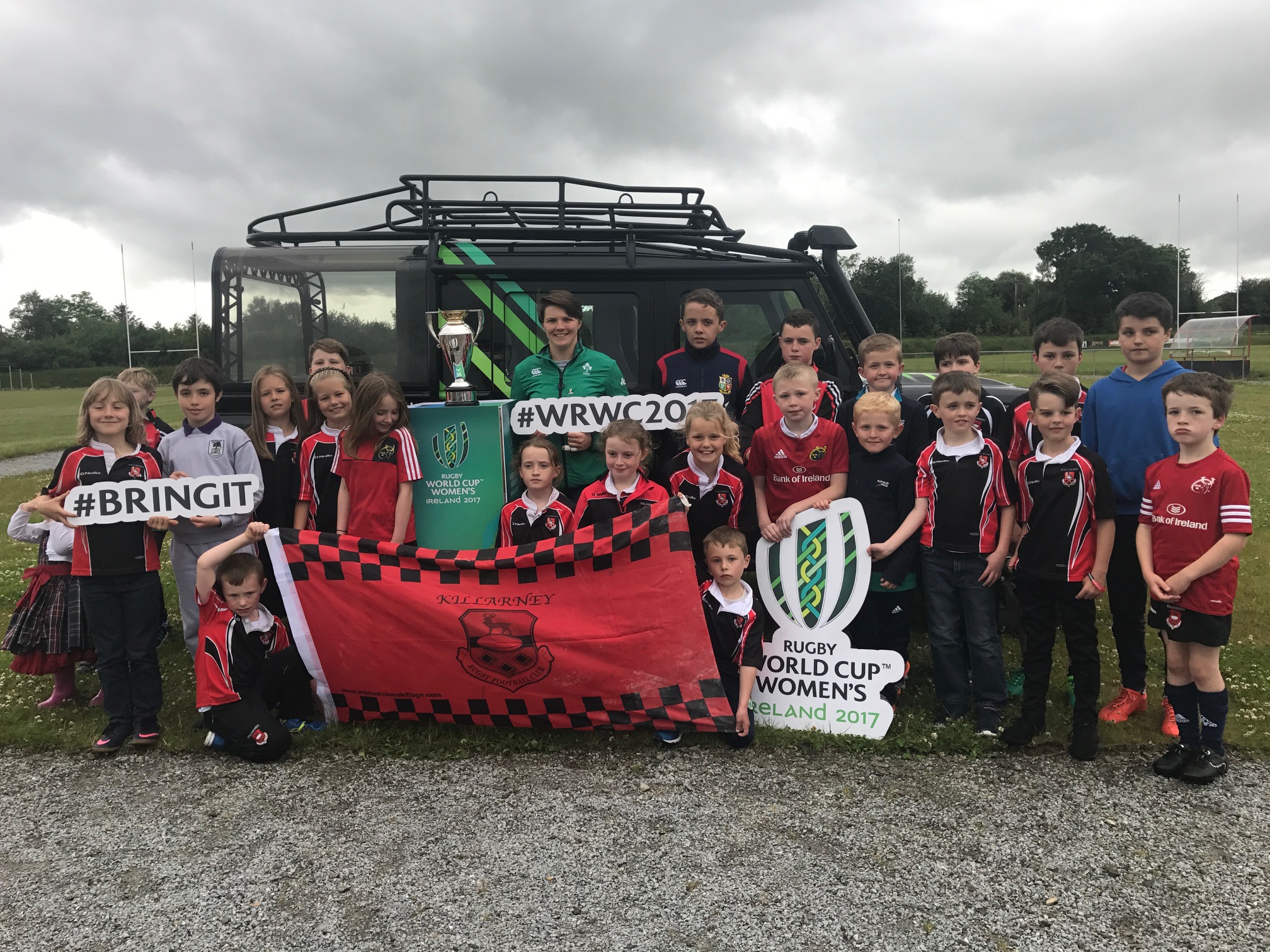 All smiles at Aghadoe

It was a privilege to have the trophy at Aghadoe and it was so great to see our KRFC girls and so many families enjoy the visit. A truly successful day in Killarney for our VIP visitor! A huge thanks must go in particular to Denis Corridan of Munster Rugby who worked hard and organised to bring the trophy to Killarney and to the three schools in particular. The hard work by Denis across the seasons is very much appreciated by the whole club! A huge thanks also to Liam Murphy – Coach and Minis Coordinator and Denise Treacy – Coach and Female Liason Officer KRFC for spending the entire day travelling to the schools promoting girls rugby with the trophy and for all the hard work done to ensure as many people as possible got to see the trophy. In visiting these schools, almost 600 children got to see the trophy! 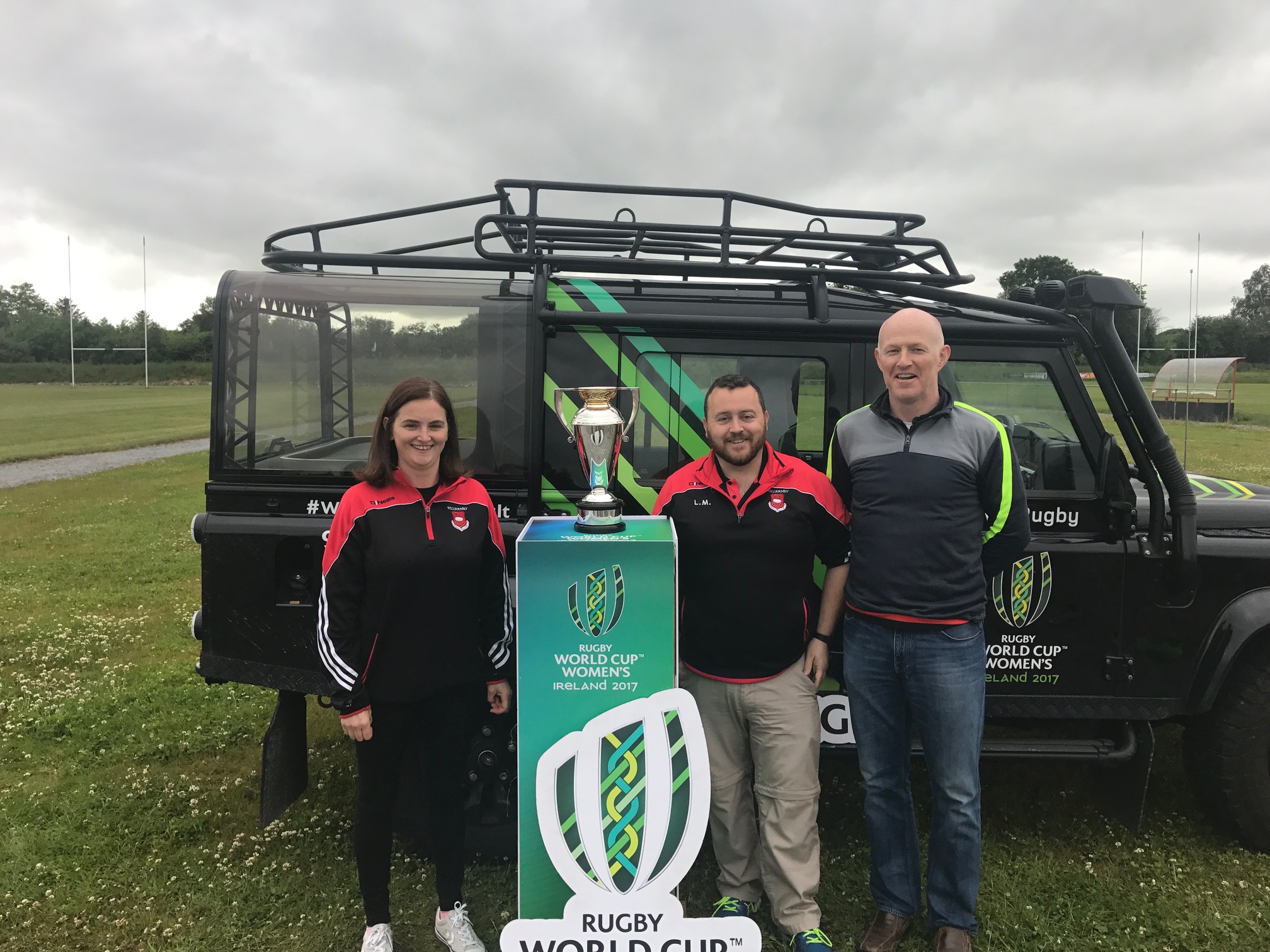 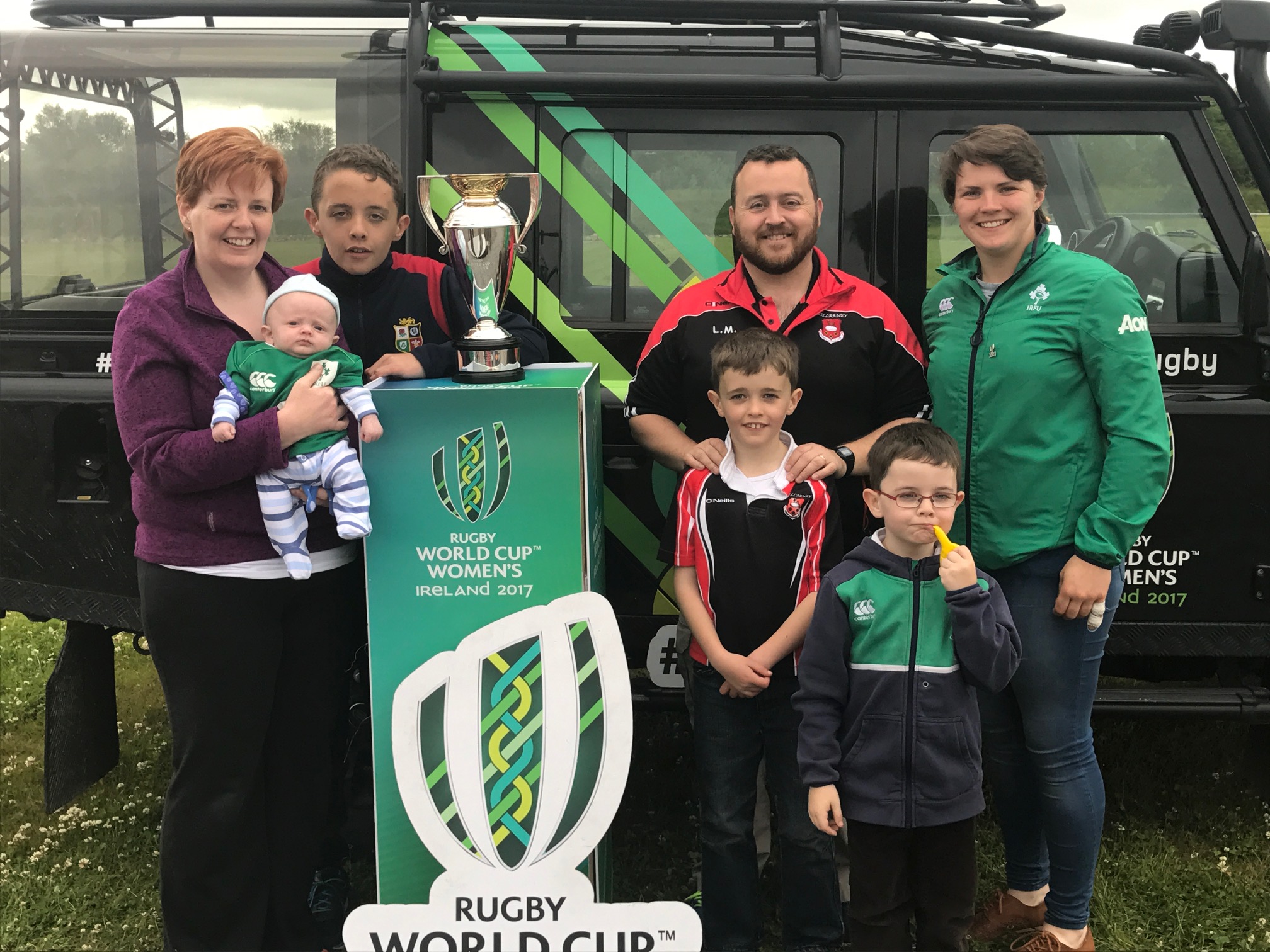 U16 and U18 girls partake in Munster Trials:Last Saturday and Sunday some of our U16 and U18 girls went forward for Munster trials, representing the club with huge pride.3 of our U18 girls (Lily Morris, Molly Jenkinson and Aisling Cahill) were in action in tough wintry conditions in Fermoy and have been training at MTU over the past number of weeks.Meanwhile 7 of our U16 travelled to Ballina/Killaloe in County Clare yesterday to take part. Taking part were Molly Gabbett, Ali O’Donoghue, Niamh Dorrian, Clodagh Foley, Fia Whelan, Katie O’Donighue and Bronagh Dorrian.Killarney RFC is incredibly proud of you all! #blackandredarmy#killarneyrfcgirls#killarneyrfc#krfc#oneclub@munsterrugby @munsterwomensrugby @irishwomensrugbysupportersclub @kerry_rugby
… See MoreSee Less
View on Facebook
·
Share

U16 and U18 Girls in Munster Trials: #ClubZap
… See MoreSee Less

Our seniors are in action today at 2.30 against Rugbaí Chorca Dhuibhne in Aghadoe. This promises is another big game for the lads so be sure to get to Aghadoe and support the lads.Best of luck to Captain Damien O’Carroll’s men, the coaching team and senior team management.#blackandredarmy#killarneyrfcseniors#killarneyrfc#krfc
… See MoreSee Less
View on Facebook
·
Share

U14 Black impress at Aghadoe.Very well done to our U14 boys team who braved the elements at Aghadoe for a very strong display against Killorglin Rugby Club in the West Munster league.Led by captain Liam McCarthy every single player put in a strong performance and won 29-15. Very well done lads!#blackandredarmy#killarneyrfcyouths#killarneyrfc#krfc
… See MoreSee Less
View on Facebook
·
Share

Minis Training continues tomorrow:Our Minis boys and girls continue training tomorrow morning at Aghadoe. New players always welcome to come along and give Mini rugby a try! Don’t forget to wrap up warm and don’t forget the gumshield! No Gumshield = No Play!For details give our Minis Coordinator Liam Murphy a shout on 087-4145662.#killarneyrfcminis#killarneyrfc#krfc#oneclub
… See MoreSee Less
View on Facebook
·
Share

Seniors back in action Sunday:This Sunday our Seniors are back in action in Conference E of the Munster Junior League as we host Rugbaí Chorca Dhuibhne at Aghadoe.Kick off is 2:30pm and all support welcome. Best of luck to all the players, coaches and team management. This promises to be a cracker so let’s get out and support the lads!#blackandredarmy#killarneyrfcseniors #killarneyrfc#krfc #oneclub
… See MoreSee Less
View on Facebook
·
Share

Both U14’s teams in action this weekend:On Saturday our U14’s teams are back in action. Our U14 Red team travel to Ballydavid to take on Rugbaí Chorca Dhuibhne for a 11:30am kick off.Meanwhile, our U14 Black host Killorglin Rugby Club at Aghadoe at 2pm.Best of luck and safe travels to both teams, coaches and all our players.#blackandredarmy#killarneyrfcyouths#killarneyrfc#krfc#oneclub
… See MoreSee Less
View on Facebook
·
Share


U16 and U18 girls partake in Munster Trials:

U14 Black impress at Aghadoe.

Seniors back in action Sunday:

This Sunday our Se

Both U14’s teams in action this weekend:

What a fantastic photo!!

We are not just another

Very well done to our U16 gi

U16 girls in big home game this Saturday: 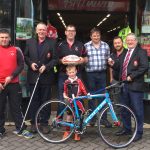 KRFC Golf Classic – On your bike for Hole in oneNews, Social 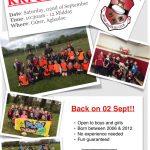