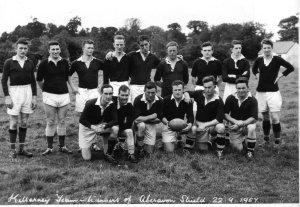 Rugby was first played in Killarney towards the latter end of the 19th century, however, there are no records detailing an official club being founded at the time. Rugby matches were played at the Cricket Field which was situated on the northern bank of the River Flesk, opposite where the present Gleneagle Pitch & putt course now stands. Among the great players at the time was Dr. William O’Sullivan who became the first Killarney man to represent Ireland at International level when he earned his first cap against Scotland in 1895. The next Killarney man to don the green of Ireland was Jerome Guerin in 1913. Ironically he made his debut against France, the country where he lost his life during the Great War.

It was in 1928 that Killarney RFC was initially formed after an interested group managed to secure a playing field at Countess Road from the Earl of Kenmare. The club was founded at a meeting in the Commercial Club, New St., Killarney on 28 April 1928. At the time, the club had players who had senior experience with clubs such as Cork Constitution, Dolphin, Sunday’s Well and U.C.C. They enjoyed relative success for a number of years but by the mid-‘30’s things began to decline. Initially emigration and then the Emergency resulted in the club ceasing to function. However, a number of locals did form a team in 1941 and won the Galwey-Foley Cup beating Castleisland in the Final. It was almost 20 years before the club was re-established again.

The club was established again in time for the 1953/54 season and almost immediately enjoyed success which continued right up to the 1970’s. The club won both the McGillycuddy Cup and Galwey-Foley Cup in both 1954/55 and 1955/56 and also reached the semi-finals of the Munster Junior Cup in 1955/56. Also that season, Welsh side Aberavon visited and played Killarney. The following year they lost the Cork County Cup Final to Cobh Pirates but became the first Kerry side to tour ‘overseas’ when they travelled to Wales to play Port Talbot and Margan.

Killarney won the Aberavon Shield in 1957/58 and the following season they were involved in an epic Galwey-Foley Cup Final encounter with their neighbours and great rivals Castleisland. The sides could not be separated after three matches including extra-time. The club won the Hayes Cup in 1959/60 and again in 1961/62. The club continued to have success until it was wound up in the early 1970s.

It was then in 1983 that the club was re-established yet again with Seán O’Sullivan becoming Club Secretary just as he did 30 years before. Junior Finnegan (current Chairman) was appointed coach; Liam McGuire (current Field Development Chairman) was elected treasurer and Conor O’Mahony as captain. The players who joined up included the Fullers (Mike – Current Club President, John and Declan), the Sullivans (Kevin, Dee and Ben), Seamus Kelly, Pete O’Sullivan, John Dermody, John O’Connor, Dave Whitby, Dan McSweeney, Mike Sheehan, Ger O’Leary, Mike McGuire and the officers mentioned above. Early results were encouraging and while the successes of the 1950s didn’t happen the club still won the Munster Junior 3 Cup in 1985. Those involved were determined to keep the club going and indeed many of those mentioned above are still actively involved in the club today.

The club struggled for success in recent times largely languishing in the bottom half of Division 3 of the Munster Junior League. However the arrival of Bill Stack as coach in 2008 who forged a strong partnership with then manager Luke O’Sullivan led to an improvement in the club’s fortunes though not immediately. The Division was split in two for the 2008/09 season and when Killarney lost their first 4 league games it looked like being a disaster. However, they then went on to win 7 games in a row to put themselves into contention for promotion with their final game away to their great rivals Castleisland, being played under lights at Crageens. Killarney needed to win to move into 2nd place and led 18-14 when the game moved into injury time. A further 13 minutes were played during which Castleisland scored a breakaway try. A long range penalty (the last kick of the game) was missed for Killarney and the dream was over. The highlight of that season was undoubtedly the 13-12 win over Shannon in the Munster Junior Plate, with an injury time penalty being the winning score. They also reached the semi-final of the Martin O’Sullivan Cup losing out to Waterford City.

The 2009/10 season saw the club fulfill a long term ambition in gaining promotion to Division 2 of the Munster Junior League. The effort put in by both players and management paid off in a dramatic season finale, as they won the promotion play-off over Charleville 21-20 with an injury time penalty. Fielding a 2nd XV for the season for the first time was a huge boost for the club. Off the field the club tried to acquire land in Kilcummin to become the club’s permanent home with plans to build two full size pitches, an all-weather pitch and ancillary facilities. Unfortunately the project had to be shelved as planning couldn’t be obtained. 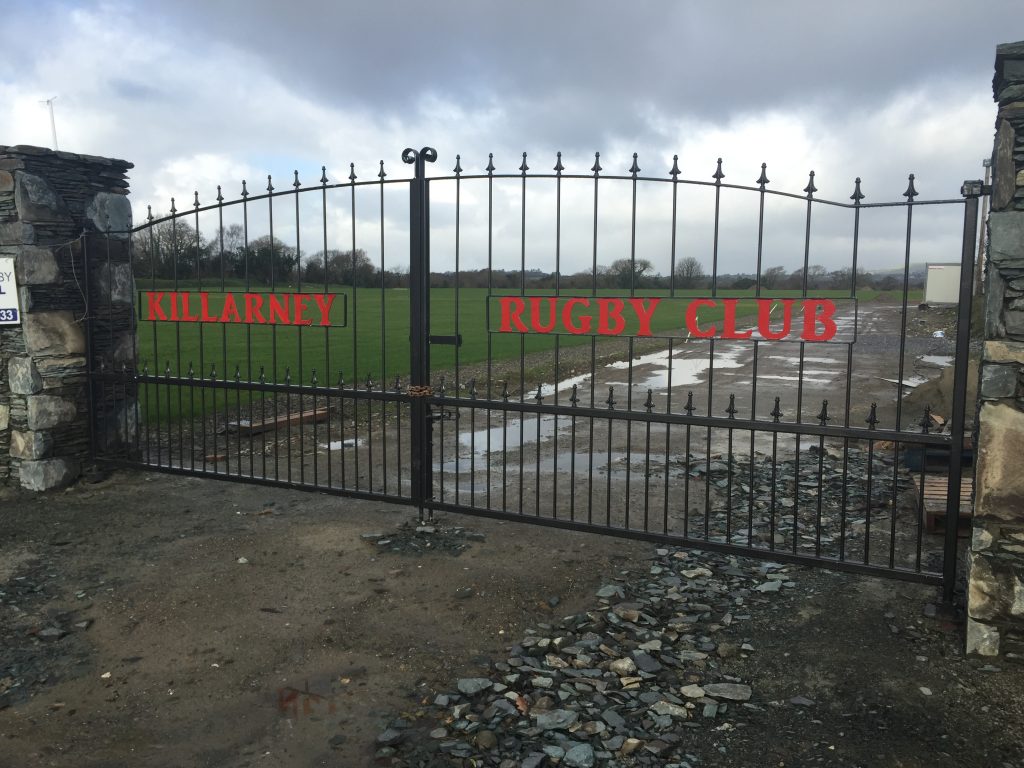 However during the 2010/11 season the club acquired new property at Aghadoe, 3 km north of the town and with planning approved, work commenced during 2012. This was only the beginning of another successful year for the club who finished in the top half of Division 2 in their first season, and then went on to win their first major provincial trophy by beating Newport in the Final of the Munster Junior Plate.

The 2016/17 season has without a doubt, been the most successful in the history of the club. The Seniors won promotion to Division 2 following wins over Douglas, Dungarvan and Killorglin in the MJL Div 3 playoffs. A third win over Killorglin for the season ensured Killarney a spot in Division 2. The lads backed this up with winning two Cups – winning the Galwey/Foley cup for the first time since 2010 and winning the Martin O’Sullivan Cup for the first time. Not to be outdone by the seniors, our U14 also won the double – winning the West Munster League and Cup. A fantastic season for the #blackandredarmy!

Now, Killarney RFC boasts a fantastic new home at Caher, Aghadoe. There is a full size training pitch, a juvenile pitch and a playing pitch as well as a full Trim Trail, which was awarded to KRFC by Coca Cola to help promote the fitness and wellbeing of all. This Trim Trail is to be found alond the 1.8km perimeter of the site and is open to one and all to use. Plans are in place to develop a state of the art clubhouse. Now, Killarney RFC has a place to call it’s own and a home base for all squads from Minis to Senior. 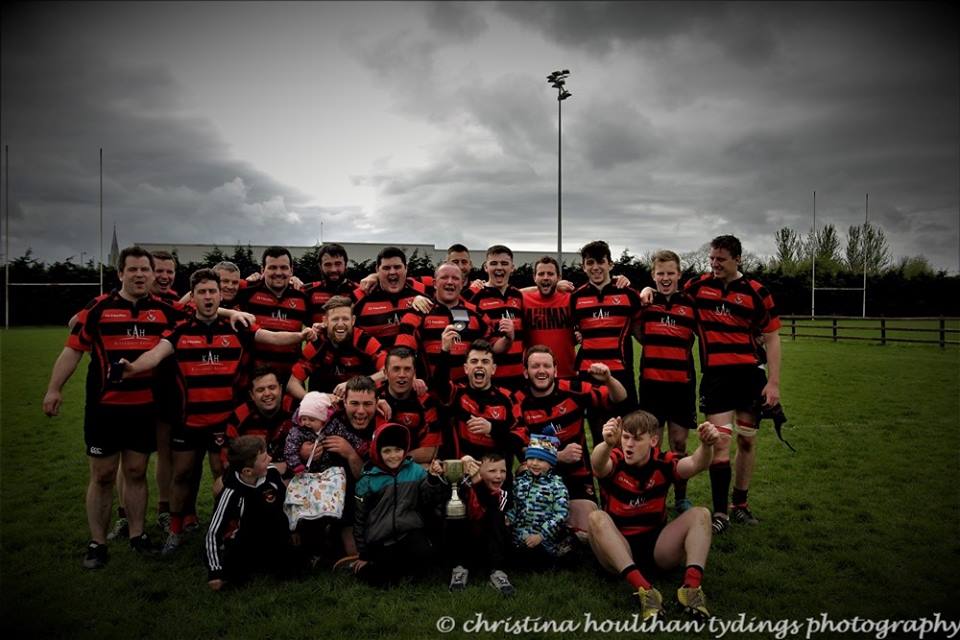 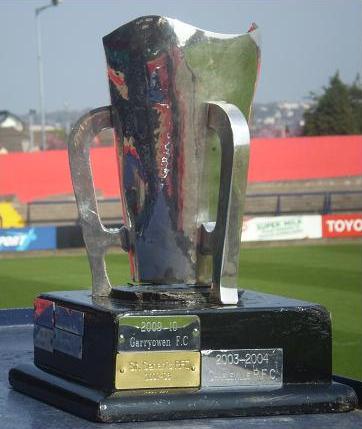 Your Club Your Country – buy online:Thanks so much to everyone who has supported our Your Club Your Country fundraiser and brought the tickets back. The support has been fantastic. Tickets are still available to buy online – see link below.If you haven’t bought one yet please do so as the closing date for online purchase is 5pm tomorrow, Wednesday the 30th of November. As you can see there are some fantastic central prizes and all monies raised goes to the club, so please support this fantastic fundraiser. Thank you,KRFCapp.galabid.com/ycyc22killarneyrfc/items/62acd701-489e-4f59-9948-3e86412fd07a?backPath=ycyc22kill…#blackandredarmy#yourclubyourcountry #killarneyrfc
… See MoreSee Less

U14 girls in league win at Tralee:Congratulations to our Killarney U14 Girls team who put in a terrific performance beating a spirited Tralee RFC team on Sunday morning at O’Dowd Park. Despite missing a number of players the 13 Killarney girls won 35 – 25. Thanks to all at Tralee RFC for the match and hospitality following the match.Well done to all players, coaches and team management! #blackandredarmy#killarneyrfcgirlsrugby #killarneyrfc Scotts Hotel Killarney
… See MoreSee Less